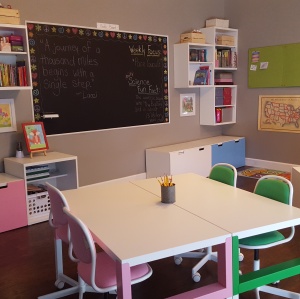 V was not really excited about school this year. Her confused persona is playing tug of war with the idea of playing & singing like a kid and complaining & moping like a disgruntled teenager.

We’ve been dealing with this for a couple of weeks now, so I decided that I wasn’t going to force her into any of the kid activities, like our morning song or calendar time. As expected, she initially moped in her chair, reluctant to join us in the circle rug, but as soon as I told her it was ok that she didn’t participate, she was on the rug singing louder than the rest of them. I understand the struggle of being obsessed with control. I think that’s what she’s going through. She just wants the opportunity to make choices. Hopefully, she doesn’t get too carried away…she is only 10.

Being that today was mostly about going through the motions, the work load was not as intense as it will soon become. We didn’t use any textbooks because they are generally regarded as being the most “un-fun”. Our science lesson and experiment was outside and interactive. Our experiment had to do with The Big Bang Theory. Vinegar and baking soda interacted inside an empty water bottle, resulting in a miniature explosion to mimic the moment the universe came into being. We used this video as a reference. The explosion was, how would my husband say it? “Epic”. As for the kids…they LOVE science.

J & L resumed their music lessons today and had library time with Dad. They chose additional literature about the solar system and had a read aloud session when they got home. While they were out, V and I did our food prep for the week. Last year, her chore was keeping the kitchen tidy and unloading the dishwasher, so this year I thought we’d graduate her to food prep. She did great! She has a knife that she is comfortable with and showed confidence and caution while executing.

Overall, I would definitely call today a success.

Signing off until tomorrow!